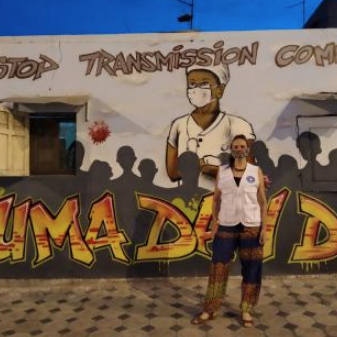 by Beatriz García-Aranda, EUAV in Senegal.

My experience as an EU Aid Volunteer is strongly marked by the current pandemic situation, caused by the new Coronavirus, SARS-CoV-2, a virus that is characteristically very contagious and that causes the disease called COVID19. Transmitted essentially from person to person, both directly through respiratory droplets and indirectly through contact with infected objects and surfaces. Campaigns were launched throughout the world to reduce infection and to strengthen health systems, to deal with thousands of patients of varying severity. In this context, the development of the pandemic in certain countries in which the control of transmissibility seemed complicated, due to their way of life and customs, and with weak basic health systems, worried the international health authorities.

In Senegal, the first case of COVID19 was diagnosed on February 28th and, till now, 1st September, cases continue to increase, with active community transmission, 70 affected districts (out of 78) and an uncertain future. There are 13,665 positive cases registered, with a probable underdiagnosis, including 284 deaths and 1 evacuated. The Dakar region is the most affected in the country with more than 2/3 of the cases. Initially the main strategy was based on preparing treatment centers, where all positive cases were isolated, but, as the disease has progressed, this tactic appears to be economically unsustainable and ineffective to control the contaminations. With a simple walk through any street in the city or town, one realizes the difficulties to keep control measures. A strict confinement here is not possible since many families live with the income generated during the day and cannot store food, they also need to move in crowded places, as markets or public transport. In this situation, it is vital to mobilize community actors to raise awareness in neighborhoods, to educate about the disease and fight against stigmatization suffered by those affected. At the same time, primary health structures needs to be strengthened, to establish a proximity care program for asymptomatic and mild cases in their homes and decentralizing the search for contacts, without forgetting all the psychosocial support that families in isolation or quarantine need. The government of Senegal, in collaboration with technical and financial partners, including Médicos del Mundo, has developed a series of actions. MdM has extensive experience in supporting the public health system in Senegal, favoring its strengthening. Since the beginning of the epidemic, it has been part of the response, in close collaboration with the Medical Region, in the department of Pikine, working to raise awareness in the community, through the training of community health agents and messages on community radios, and reinforcing health centers with material and specific training.

I am a specialist in cardiology in Spain and, after working in important hospitals in Madrid and London, I decided to turn my career around, and return to what was my dream when I decided to study Medicine, that is working in the humanitarian action and development and cooperation sector. Dream fed by the years that I had been collaborating as a volunteer, supporting projects for the vulnerable population in my city, fighting against the injustices that impeded their access to Health.

I came across the EU Aid Volunteers initiative while looking for an opportunity to participate in projects on the ground. Thanks to this program, many people like me, who are looking for an opportunity to finish taking the plunge, can access positions in various NGOs well known for their excellent work in the area, to improve their training and acquire very valuable experience. The position for which I was selected was “strengthening the public health system in Senegal” and, considering the current epidemiological context, it is timelier than ever. I have joined a COVID19 work team, as a “focal point”, as such I am in charge of epidemiological data management, participation in various work forums, coordination with those responsible for health districts, training for health workers and community actors, technical assistance for activities as well as being responsible for training the members of the MdM Senegal team to avoid their contagion. The experience has been very gratifying for me and of great help for MdM in the region, in addition to being able to directly see the impact of my work on the population.

In the coming weeks we are going to reinforce our action following the lines that we started months ago and new ones, related to the fight against the disease and to the strengthening of the health system and its resilience to face this and other future epidemics , as well as the maintenance of the key health programs we were already working on, such as maternal and child health, HIV or the fight against gender violence. For this we have several projects, in which we are also going to expand our area of ​​intervention, starting to work in the Kedougou region, in the south of the country, on the border with Guinea-Conakry and Mali, an area famous for its gold mines and for the violation of the human rights of various population groups. We are also going to collaborate with AMREF Health Africa on an ambitious project to fight COVID19 in a large part of the neighboring country, Republic of Guinea. I am fortunate to be part of the team of experts in COVID19 and public health that are going to carry out these projects, which will be a wonderful experience.