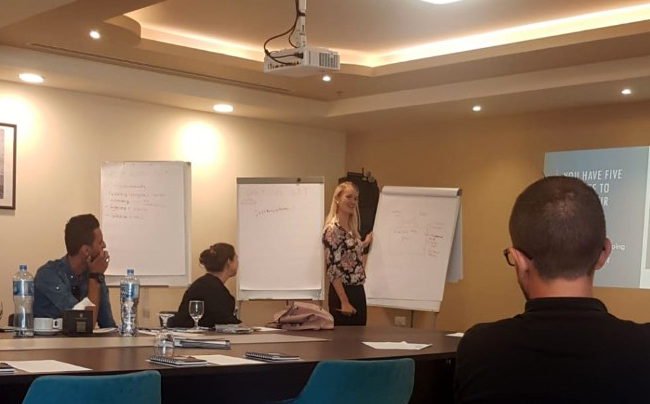 Gender-based violence is occurring at staggering levels throughout the world. At least one woman in every three globally has experienced physical or sexual abuse in her lifetime (WHO, 2013). I was no stranger to this injustice, having worked on the frontline of domestic abuse response in the UK for the last four years. Supporting survivors of gender-based violence living in refuges and community settings, I had witnessed first-hand the destructive impact it wrecks on survivors, as well as their children, wider family networks and communities.

My desire to lend my experience to support vulnerable survivors in international settings led me to spend the last four months working with Médicos del Mundo in Palestine as a Senior EU Aid Volunteer. It has been a truly eye-opening experience. The programme has enabled me to develop my understanding of a complex political context, to observe how humanitarian organizations are responding to the unique protection needs of Palestinian women and girls and to pass on my own knowledge and experience by training the local Médicos del Mundo team on how to identify and support survivors of gender-based violence among their beneficiaries.

According to the most recent survey data, 37% of married women have experienced gender-based violence in Palestine (PCBS, 2011). The protracted humanitarian crisis and the prevailing patriarchal culture in Palestinian society have led to high gender inequality and, in turn, significant violence and discrimination directed at women. A major issue in the Palestinian context is that due to the stigma attached to abuse and fears of reprisal, only 0.7% of survivors proactively seek help. This makes it vital that Médicos del Mundo staff who provide MHPSS services to Bedouin communities – and are as such in a unique position to support survivors – have the skills to make survivors feel comfortable disclosing their abuse to them and to link them in with the support they need.

At the end of my four months in Palestine, I had the opportunity to deliver a day-long training to the whole Médicos del Mundo team to help them build these skills. I began the training by inviting the team to unpack the concept of gender and to reflect on the norms and activities that Palestinian society assigns to women, men, girls and boys and how that impacts on the expectations that society subsequently has on each of these groups. After then discussing the many forms that violence can take, we delved deeper into exploring how gender-based violence manifests itself, why it takes place and its consequences for individuals, families and communities.

Before embarking on the training, I had consulted the team to understand what they hoped to get out of it. They had requested practical skills and opportunities to build their confidence in asking patients whether they were experiencing gender-based violence. The second half of the day-long training – following a delicious Palestinian buffet lunch – was therefore focused on setting out the core guiding principles for survivor-centred care, offering specific suggestions for asking beneficiaries about gender-based violence, setting out helpful and unhelpful responses to disclosures and providing an opportunity through role play for the team to practice their newly acquired skills. I finished the day by providing advice about effective safety planning with survivors before explaining the recently launched National Referral System for survivors of gender-based violence in the West Bank and outlining next steps for the team to build systematic response to situations of gender-based violence into their policies and procedures.

The training participants reported an improvement of over 30% in their practical skills in responding to disclosures of gender-based violence by the end of the day. The team informed me that they wished this kind of training could be delivered not just to colleagues at other organizations, but to their friends and families. “This material is very important to know”, several told me at the end of the day. It was a real privilege to work with such a dedicated, motivated team. I have come away feeling more passionate than ever about ensuring survivors of gender-based violence across the world are able to access the support and safety that they all deserve.